One of the things I've learnt as a parent of 3 kids under 6 is to remember to ride only as far as the kids can go...and still be able to return! What also helps is the ability to work out how to ride one handed whilst hauling a kids bike across your shoulder.

Handling the spread of skills and interest across a 2, 4 and 6y.o makes for some interesting riding challenges. Whilst my 6y.o. is capable of much better distances and adventures now, we're still a little limited by her 4y.o. brothers ability to go the distance. At least the youngest is happy to kick back in the kiddicarrier with a handful of snacks and a teddy.

A lot of riding policy and infrastructure is, however, still geared towards the individual cyclist, when there are a whole bunch of emerging riders in young families wanting to get out and about, exercising their autonomy and skills mastery whilst being close enough to the parental wing in case of emergency..or hunger..or exhaustion..or a nose needing a wipe. The list goes on...and on..

Having a bit of extra power can transform short to medium-range family rides. Where adventures had previously dissipated into unending coaxing, cajoling to return to home base for an overtired kid, now I can pop the pooped-one into the trailer, sling their little bike over the shoulder and carry on (mostly) cheerfully to the end of the ride. It's no bakfiet or cargocycle, but at least the middle one has had a go at getting out, building skills, safe in the knowledge that they can still participate towards the end (if a little more passively as a trailer passenger).

I have noticed a local rider recently working themselves as a bicycling B-double equivalent, with a tagalong for their eldest rider and trailer attached to the tagalong. Makes for a pretty long rig, and very demanding load on single bike brakes when pulling up all that extra  weight. 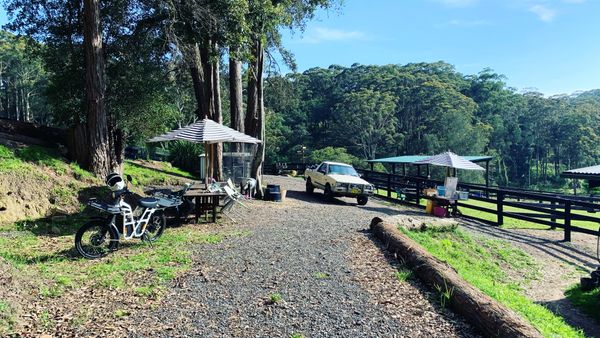